If you missed it, then I recommend you catch up with Politics Scotland, broadcast on BBC2 Scotland shortly after the Queen's speech. Link below.

Joanna Cherry QC MP was joined by 3 unelected Lords for what was to be a discussion of the content of the Queen's speech. Could they not rustle up some MPs? Obviously not.

One MP, 3 Lords: Lord Andrew Dunlop, a Conservative (but introduced as the  representative of the UK Government), Lord George Foulkes for Labour and Jeremy Purvis, Baron Purvis of Tweed for the Liberal Democrats. 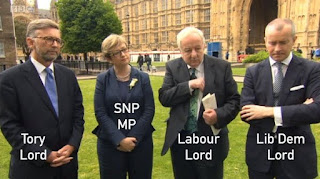 So they're on the grass outside the Houses of Parliament and the interviewer asked what the Queen's speech meant for Scotland.

Lord Dunlop kicked off with a well rehearsed response to what was in it for Scotland. (Not a lot).

Joanna Cherry gave it laldy laying out why it was a rehash of last year's speech with little or no relevance to Scotland's needs.

Then it went a bit weird. George Foulkes weird.

George embarked upon an #SNPBad rant for which at times he had to look up to remember his lines and Jeremy Purvis jumped in with a rejoinder of even more #SNPBad with George nodding him on.

Then it went much weirder.

Joanna Cherry is an asset to Scotland and she held her ground brilliantly as around her snaked a Lordly barrage of Bullingdon, buffoonery, bullying and Better Together Ltd.

I doff my cap to you Joanna Cherry. I'd have bitten George's waggy finger right off.