Until last night, I'd never been to Brechin. If you haven't visited before it's a beautiful ancient Cathedral City with lots going on. Put it on your to do list. Do that. Now. Seriously.

I'd arrived early at the Caledonia Hotel for a meeting with the fabulous YES Brechin peeps and within 2 mins I was ensconced in a cosy conversation with an anarcho-syndicalist blacksmith. Result!

The SNP Branch meeting, which had been taking place in the room next door, gradually spilled out into the lounge bar, where they'd set up for the main event. Scottish independence supporters of all ages and backgrounds and parties were coming together to get a steer on our post Brexit situation.

The bar was suddenly bustling with folks grabbing a good seat to hear the guest speaker Craig Murray. Craig had moved to Scotland specifically to campaign for independence having spent his career in the Diplomatic Service of the United Kingdom.

Craig gave them food for thought alright -  a whole buffet. He covered all of the different options open to the people of Scotland and did so with a glass of fine malt in his hand. It was a warm, genuine address from a new Scot to his fellow Scots. There were lessons learned from Indyref 1, there were "oohs" and "aahs" and eyebrows raised. There were pennies dropping in everyone's minds. It was a joy to see an audience engaged in such possibility. The fire of independence was burning bright in their eyes, this was a 'game on' meeting.

In the theatrical tradition of: 'make 'em laugh make 'em cry make 'em wait', just after Craig's talk, the Master of Ceremonies announced that tea, coffee and sandwiches would be served before Craig would take the Q&A session. This was a brilliant move. The volume rose and the discussions began. Cups and saucers clinked, the happy meeting of new friends and old. I have rarely seen such a convivial gathering.

During the meeting we got the news that Jeremy Corbyn had made the leadership ballot and a round of applause broke out. We may be independence supporters, but we are defenders of democracy too.

The Q & A kicked off session two with purpose. We covered topics from currency to defence. We addressed the successes and failures of the Yes Campaign. We shared lessons from other Countries who'd won their independence. We pondered on how to persuade no voters to join the call for independence. Craig again delighted the audience with insights and observations that had them howling with laughter one minute and stroking their chins in deep contemplation the next.

I'm not going to bust Craig's patter here. I'd urge you to go hear him speak or get him to come along to your Yes group. I can highly recommend his indoor fireworks display.

My first visit to Brechin was an eye opener. If you think the Yes movement has subsided, then think again. These meetings are starting to take place all over Scotland. It's a grand night out and you'll make contact with people that will make your heart glad.

I was delighted to get the opportunity to get to meet people I only ever get to speak to online. I treasure moments like that. But my real take-away from Brechin was the idea that the only way we get independence is to get these meetings going in every pub, in every town, in every village and every City. We got gubbed in 2014. They cawed the feet from us. The time has come for us to get our confidence back and get out there and talk to each other.

No-one will give us independence. We will get there by inviting no voters to nights like this.

My thanks to the people of Brechin and it's environs for a great event. A special thanks to Paula Rose. 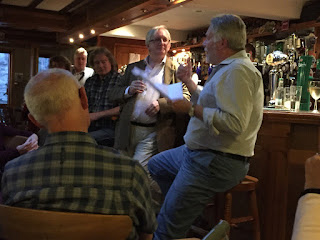